What’s that lurking below you in the sea… Is it a blue-ringed octopus, mimic octopus, or even a vampire octopus? Does it have eight arms — or is it legs? Did you know that they’re called “octopuses” and not “octopi”?

Read our octopus facts for kids to find out everything you didn’t know about these cool and quirky swimmers! There are so many different types of octopuses, and they live in every ocean of the world but like warm water best (don’t you?). Just don’t ever call them squids… 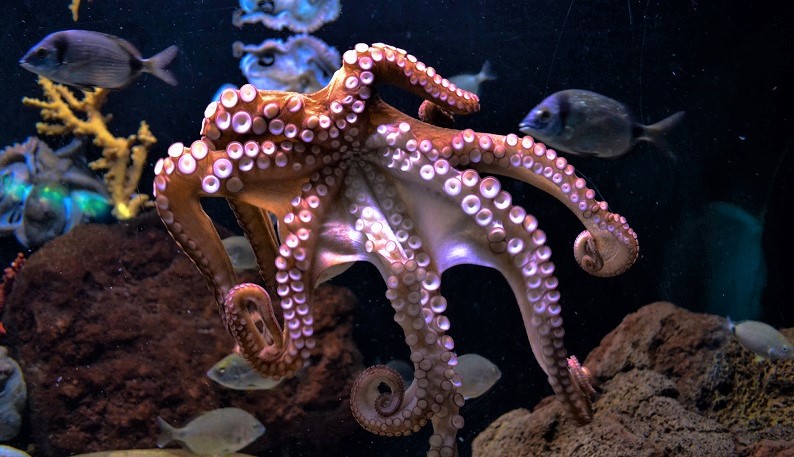 1 Holes and coral reefs are home sweet home for octopuses

Most types of octopus live near the coast and make their homes in rocks and corals. They’re usually solitary so they live alone. In fact octopuses are also territorial and defend their living space against intruders. If they could write, there would be “No trespassing” signs everywhere!

Octopuses swim backwards by blasting water through a muscular tube on their body called a “siphon” and can reach speeds of up to 40 km/h for short bursts. They can also crawl along the ocean floor, poking their arms into small openings in search of food. Imagine how many sweets you could carry if you had eight arms? 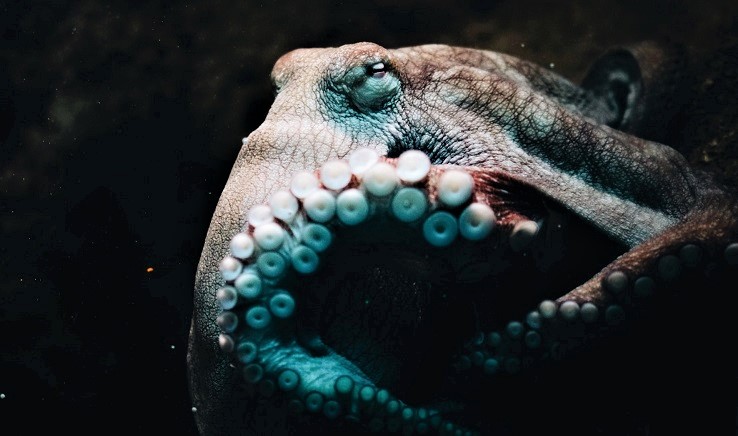 3 Here’s what’s on the octopus menu

Adult octopuses eat crabs, snails, small fishes, and even (oh dear!) other octopuses. They don’t eat humans, thank goodness, but their beak-like mouth can deliver a nasty bite and also injects venom. This venom is usually harmless to humans. But beware the blue-ringed octopus, also called the blue octopus! The brightly coloured, pint-sized predator lives in the Pacific and looks cute, but it can kill. The venom causes paralysis that stops you breathing.

4 They build their own homes

Octopuses live in dens made of rocks, and they’re amazing builders. They use their powerful arms and the suckers (the suction cups on an octopus’ arm) to move rocks into place. And they can even build a “rock door” that pulls closed when the octopus is home. Should you knock before entering? It’s best not to visit at all, because they’re pretty grumpy loners. Octopuses even scatter rocks and shells to hide their den.

If you’re an octopus-snacking seal, watch out! These eight-armed wonders have a few sneaky tricks up their sleves. When threatened, they shoot an inky fluid from their body which makes the water dark and murky, helping them hide. They can also change their colour to blend in with their surroundings. And if a limb gets caught, they simply leave it behind! Don’t worry. It grows back.

6 They have arms and legs!

The word octopus comes from the Greek, októpus, which means "eight foot”. Most people think that octopuses have eight arms. Here’s a cute octopus fact: They have both feet and arms! Six limbs function as arms and two act more like legs, helping the octopus walk along the seabed and push off when swimming. Pretend you’re swimming with an octopus and make this multicolour mermaid sand.

7 There are hundreds of types of octopus

There are 289 different octopus species and all are in fact weird and wonderful in their own ways. The abdopus octopus or land octopus leaves the water to hunt for crabs. In the ocean’s deepest reaches, the bigfin squid waves giant tentacles and looks like an octopus alien. Remember! A squid is not an octopus. It has a triangular instead of round head, two fins and tentacles as well as arms.

Their official name is vampyroteuthis infernalis, which means "the vampire squid of hell”. Yet they’re living fossils, related more closely to extinct animals. Vampire squids have eight tentacles connected by webbing. Their special trick? They can turn themselves inside out to hide from predators!

The coconut octopus walks on two limbs (like a human) and carries a coconut shell on its head. This “hat” isn’t an ocean fashion but in fact helps hide the octopus from predators swimming above.

10 They can be great actors

Should the octopus Oscar go to the mimic octopus? It imitates other sea creatures like jellyfish, sea snakes, and crabs to scare off predators. To look like a snake, for example, it hides in a hole and waves two arms about.

11 They’re smart and have more brains than we do

Octopus brains are large and complex, with excellent long-term memory and problem-solving skills. And here’s a mind-boggling octopus fact. They have nine brains: One central brain and eight mini brains that each control one arm or leg. Their super-squishy bodies (no bones!), turn these cunning cephalopods into escape artists.

12 They have royal blood

When people are royalty, we say they have “blue blood”. Octopuses really do have blue blood because their blood contains a blue copper called haemocyanin, which helps them survive in low-oxygen water (you don’t have to curtsey to them though). They also have three hearts! Do you have organ envy yet?

The full name of the world’s biggest octopus is the giant Pacific octopus. It’s an expert escape artist and can even pry the lid off a tank. From the top of its body to the tips of its arms it measures nearly 5 metres and can weigh up to 50 kilos! Watch this live cam footage of a giant octopus.

A female octopus lays around 200,000 eggs and spends all her time lovingly cleaning and protecting them. In fact, she’s so busy looking after her eggs, that she forgets to eat and dies of starvation shortly after they hatch. Now that’s dedication.

While many marine animals are struggling against environmental problems like global warming and overfishing, most octopus populations are booming! They grow fast and adapt quickly to change. Plus, as humans fish out big predator fish like tuna, there are more small fish left for octopuses to eat. Will we one day live on the Planet of the Octopus? Find out 10 things you can do to save the ocean from dangers like plastic and over-fishing, so that all marine species can thrive.

If you love octopusses you’ll love our interview with a coral reef diver! You find all kind of activities on our activities hub. Or get the Static Squid in your toucanBox, plus educational magazine and sticker sheet, for just £5.95!